When I started my keyboard journey I bought a Razer Blackwidow Chroma Tournament Edition. This keyboard was marketed towards gamers and had all the bells and whistles of a “gaming” keyboard. Poorly designed software. Loud, clicky keys. And of course, The RGBs! I soon found that I didn’t like it much as I had originally expected (even though I’ve owned Razer products in the past and was never really happy with them). I wasn’t a fan of how the board felt. The keycaps felt cheap. The matte finish on the case felt weird. The non-standard bottom row was hard to find after market keycaps for, something I had just then found out existed. It just wasn’t for me. I had also recently started browsing r/mk and was seeing all of the cool keyboards people were posting. I kept seeing Pok3rs all over the place and I thought that the (even) smaller layout was really interesting. I had no idea that 60% keyboards were even a thing. I mean, I had just found out that some keyboards didn’t have number pads! Well, it didn’t take me long to purchase a Pok3r for myself. I fell in love with it, even if it did have Cherry MX Blue switches. Fast forward maybe 6 or 7 months and I’m really interested in 60% keyboards. I started getting deeper and deeper into the hobby and the scene surrounding it. I made a few friends in the hobby. I discovered geekhack and group buys. I spent too much money on keycaps in a profile I thought I liked but turned out to hate. But I hadn’t built my own keyboard and I decided that it was time. I was so proud of the final build. I still have some photos of it on Instagram. This was probably six or so years ago and a lot has changed. I no longer have that fist build, and to be honest, I’m no sure I would even want it. I really had no idea what I was doing. I’ve built a lot of keyboards since then, and I mean, a lot. Many different sizes and styles. Different switches and stabilizers. I started to actually take the time to lube each switch instead of just trusting the factory lube. I decided I wanted to take all of this knowledge and build myself another 60% keyboard.

Most of the 60% keyboards on the market are tray mount, meaning that you connect the PCB directly to the case using a few standoffs. Normally this is a bad thing as it creates a very stiff and inconsistent typing feel. I wanted to build a “cheap” 60% keyboard that didn’t feel terrible to type on. I was looking around for cases for a while until I finally decided on one.

The Baka60 from Paramount Keeb. When I was looking, both the full kit and the case were on sale. “Perfect!”, I thought and decided to purchase the case only in the Freeze colorway. One of the reasons that I decided on the Baka60 was because it omits the center standoffs. This helps to remove the “inconsistent” typing feel by taking away some of the weird pressure points from the tray mount style. I also wanted the board to flex a bit more than my older 60% tray mounts. So I decided to pick up the NOP60 (July 4th 2022 Edit: The NOP60 has been discontinued and replaced by the SNOP60) PCB from Checker Boards. It has a nice little flex cut down the middle. A flex cut is great and all, but it’s not going to make much of a difference if we are using a generic universal aluminum plate. Well lucky for me, Carolina Mech makes a nice 60% FR4 Half Plate! The combination of these three things gives the board a really nice amount of flex. After using it for the last few days, I’ve really grown to like the amount of flex. It’s a lot less than the Mode SixtyFive with a half plate and top mount. I didn’t really like the amount of flex that the Mode had and this is a nice middle ground between too much flex and being stiff as a board. I actually really like the way this keyboard feels. To me, this is the perfect balance between too flexy and too stiff. The one flex cut in the PCB pairs perfectly with the half plate and the lack of center posts in the Baka60 is a very welcomed change for me. I’ve only ever had normal tray mount cases before this.

The Porcelain Blue switches are a really nice linear switch made by Tecsee. Recently I’ve really been enjoying linear switches and these are no exception. After lubing them with Krytox 205g0 they are very smooth. Recently I’ve taken to only lubing the stems and springs and I have to say, these feel just as smooth as the switches that I’ve lubed fully. I may stick to doing this from now on.

I’m really happy with the feel of this board. It’s definitely going to make it into my normal keyboard rotation.

When I first assembled this keyboard it sounded pretty hallow. The Baka60 has quite a bit of open space for a 60% keyboard case. I think the reason it sounds so hallow is because it has some extra space to accommodate a bluetooth battery. Whatever the reason, I didn’t like how it sounded. The first “mod” I did was adding some Poly-Fil. This made it sound less hallow, but it just kind of sounded like all the other keyboards I have. I was looking for something a little bit different so I kept trying. Next I replaced the Poly-Fil with some Neoprene. This just resulted a similar sound to the Poly-Fil. My last mod was the Tempest/Tape mod. This mod was created by a user by the name of Tempest and all consists of is putting some layers of tape on the back of the PCB. I’ve tried this before but haven’t really liked the results so I didn’t have high hopes. But boy was I surprised. This made the sound way deeper. It also happened to make it louder. I guess this makes sense, I just didn’t expect it. The tape mod, along with the long stems of the Porcelain Blues make for a really nice, deep sound. Or what the kids like to call “THOC”. Here’s a quick sound test.

I’m really happy with how this board turned out. I love the 60% form factor. I love the amount of flex. I love the sound. I love the way that everything looks together. I would 100% recommend the Baka60 for a solid 60% case. I wish I could comment on the full Baka60 kit that Paramount Keebs sells but I already had the NOP60 PCB laying around and figured I’d put it to good use. As for the switches, I love them. They sound great. They feel great. They look great. I have a bad habit of just buying pretty looking switches, even though they are going to be covered by key caps. I just really like a fully aesthetic build. If you have any questions, please feel free to contact me. (Links are on the front page) I’d love feedback on any of my articles here. For now I’ll leave you with some photos. 😸 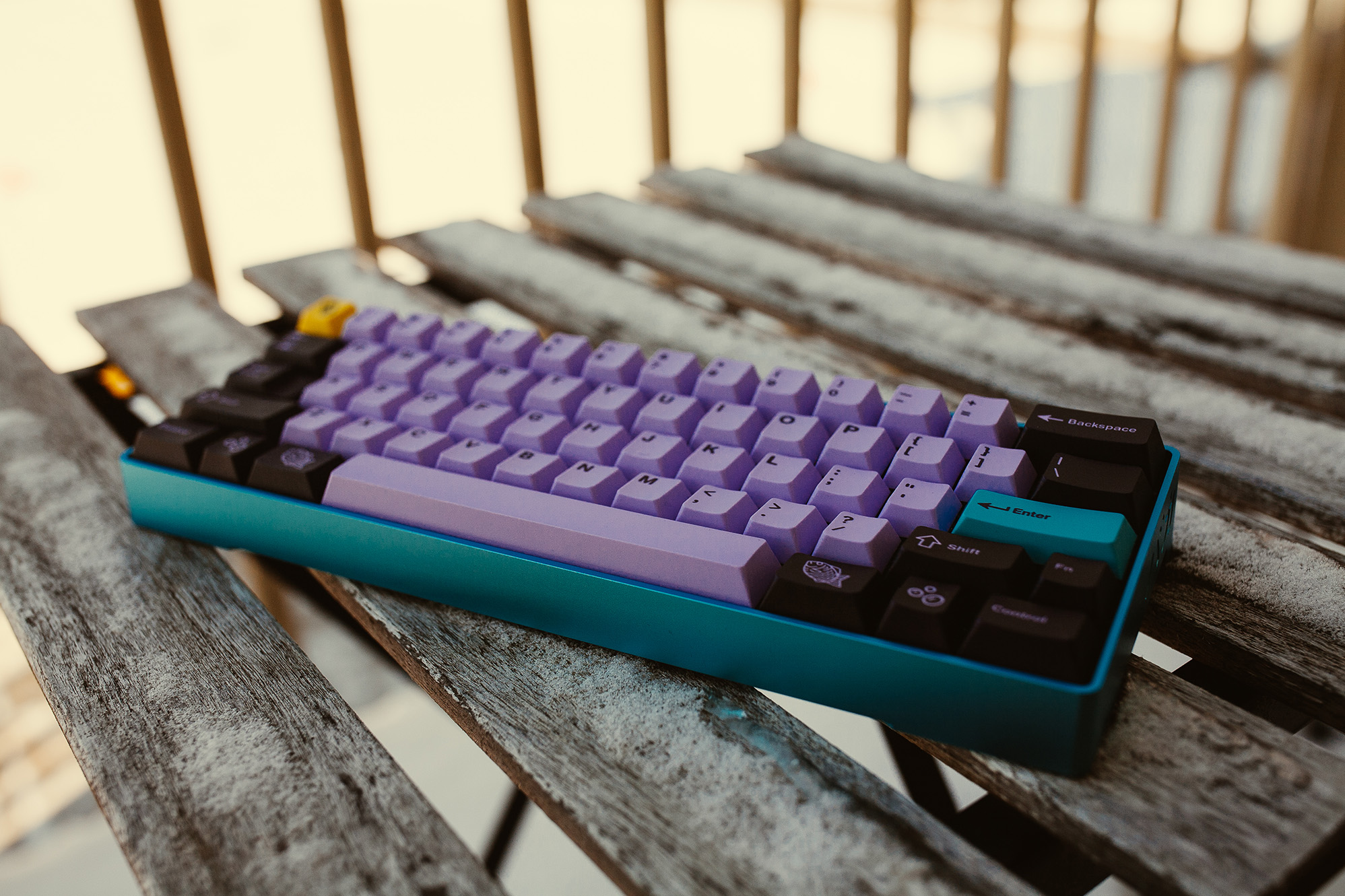